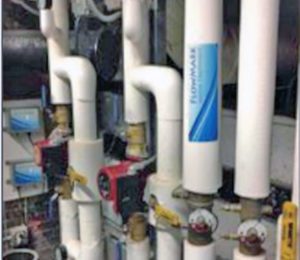 Hosteling International Hotel in Boston was having recurring problems with lack of hot water.  It seems that a mixing valve that supplied hot water to the guest rooms was fouling with calcite (calcium carbonate) scale.  Until FlowMark arrived the only option was to remove and clean or replace the valve every three months to provide reliable hot water service.  In addition, the hotel was experiencing added energy cost each month as the heat transfer surfaces of the hot water boilers were fouling with insulating calcium carbonate scale deposits.  The hotel was looking for a long-term solution to their hot water issues.

The solution to the problem turned out to be the FlowMark Electronic Water Treatment System.  By changing the way minerals in the hot water precipitate, a harmless microscopic powder is formed that can easily passes through the system without leaving behind tenacious scale deposits.  The hotel decided to give the system a try and added it to protect the mixing valve and two separate hot water heaters.  It was a simple installation taking about 20 minutes.  After it was turned on the hotel has not had a hot water issue and the constant cleaning is a thing of the past.

In addition to the better reliability, the system provides significant energy savings due to reduction of scale deposits forming in the hot water heaters.  The savings due to not needing to replace and clean the mixing valve is approximately $3,690 per year.  Thus the systems paid for themselves in less than 12 months.